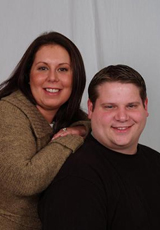 My name is Katie Conrad. I was 24 when I was diagnosed with what I now call “The Big V” and I thought my life was over. The journey of procuring what seemed like a life sentence of a diagnosis was certainly wrought with pain, confusion and financial expense, and finding an effective, liveable treatment plan was definitely a longer, more painful road paved with as many disappointments as triumphs. However, when your life is full of promise (I had just gotten my first job and was engaged) and a doctor hands down a verdict of chronic pain, you learn one thing: you can’t give up!

My vulvodynia began with a rash that occurred after intercourse with my then fiancé, Kevin, who is now my wonderfully supportive and loving husband. I woke up the morning after with a burning sensation, took a peek with my hand mirror and proceeded to freak out when I saw unusual redness. I made an appointment with my gynecologist who examined and tested me for herpes, gonorrhea, the whole gambit. It’s a very strange thing in life when you look back on a situation and say to yourself, ‘Man, I wish I had herpes,’ because at least there is a clear treatment plan for that. It’s something thousands of doctors have diagnosed and treated with confidence in young women who could at least, when armed with a Valtrex script, wait out a resolution.

This was not the case for me. After about my 12th pelvic exam, two rounds of herpes medication and many cold baths, my regular gynecologist was smart enough to realize this was out of his league. Unlike many women in my situation, I was lucky enough to not be strung along on the false hope of infection medications for very long. He sent me to a vulvovaginal specialist to figure out why, even when the rash was gone, my pain was not.
I saw the very best vulvovaginal specialists in the country and some local doctors along the way. At first, just having a doctor give my horrific problem a name – vulvodynia and pelvic floor muscle dysfunction – was a relief. But after this brief feeling of relief passed, I began my quest to find some kind of respite from the constant pain. Could I dare think that I might find a cure?

I am a relentless person and all I wanted to do was find someone who was cured – that one woman who could honestly say that she had been there and came out on the other side. I felt that if I could just meet her or even hear her story that something must be out there for me too. I joined several support groups and read everything I could get my hands on. I talked to as many women as I could and tried absolutely everything. And you must. You must try absolutely everything within your means, and never stop thinking positively that this treatment might be your cure. One thing that is frustrating about vulvodynia, or any chronic pain problem, is that there isn’t one true treatment protocol that works for everyone and some of the therapies are experimental. Instead of viewing this as negative, I considered it a collection of possibilities. As long as there were more treatments to try, there was still hope for me.

Eventually I took a medical leave from my awesome new job. Two months later, I was taking an antidepressant and undergoing physical therapy. I was about 75 percent pain-free most of the time and very thankful for this progress. But again, I didn’t stop there. You cannot ever give up. I decided to take the advice of a woman in my support group and obtain another opinion from a local doctor who took my insurance. Her treatment recommendation tipped the scales and I returned to work at the end of my leave 90-95 percent pain-free on most days.

In the end, I had seen nine doctors and two physical therapists. I tried almost every medication and diet suggested to me. What helped me return to work and back to being a bit of myself was a combination of an antidepressant medication, physical therapy and topical cream that I still consider magical in nature.
I wish I could say that I remained in that nearly pain-free place forever, but life changes. Stress wreaks havoc on your body. You forget you have a “chronic pain problem” and you don’t keep up with your maintenance therapy. I can say that I now possess the tools to get myself back to that place, and I often do.

In addition to never giving up, I’ve learned many lessons. I have learned that my husband loves me for so many other reasons besides sex and that we can get through anything together. I have learned how to say ‘no’ to overextending myself and ‘yes’ to taking care of myself. I have learned empathy towards others who are suffering that I honestly didn’t have before this happened to me. Mostly, I have learned that you can really live your life with chronic pain when you use the resources you have available, lean on the people who really love you and approach everything with hope.

Sometimes I do still cry to my husband and ask him why this happened to me. He often answers: “I think this happened because you have a strong voice and maybe you can help other women. Maybe you were meant to help others.” I hope I have here by sharing my story today.