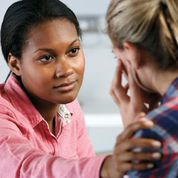 In April 2013, I went to my primary care doctor with vulvar burning that both of us thought was a yeast infection. She treated me, but the pain got worse. I took various medications, e.g., Neurontin, Lyrica, and Tramadol, but I had adverse reactions to all of them, as well as to the topical creams.

Five months later, I made a desperate plea to my doctor, saying that I couldn’t stand the pain any longer, and she immediately sent me to a gynecologist. She, too, suspected an infection, did a thorough vaginal exam and scheduled a D & C. Then I was sent to a nurse practitioner who specialized in gynecologic and bladder conditions. She was wonderful and knowledgeable, checked for infections, and recommended Aquaphor ointment for the burning. She even suspected shingles, so I took Valtrex. My nurse practitioner also prescribed a painkiller, a combination of hydrocodone and acetaminophen, and I continued Tramadol as needed. Eventually she prescribed Estradiol, a compounded cream, which helped somewhat. I continued to use Aquaphor after urination to relieve the burning sensation. I also applied ice packs after getting up to urinate during the night, which helped me get back to sleep.

By the summer of 2014, my doctors decided that I should go to the Mayo Clinic. I couldn’t get an appointment until late October. One day in August I had so much pain I called the clinic crying, and they moved up my appointment to September. I saw a gynecologist, physical therapist and urologist, all of whom were very helpful. The gynecologist diagnosed me with vulvodynia, explaining that it was a chronic condition that could be managed but not cured. He also said it may have been the result of a fall earlier in my life. He gave me lidocaine to numb the area and a brochure to the National Vulvodynia Association (NVA). I read that the NVA was founded by five vulvodynia patients, called for more information and have been a member for the past two years. I appreciate receiving the newsletters that have articles by different specialists and present the latest research findings. I participated in one study and was surprised that it didn’t have any questions for women who aren’t sexually active.

For the past year, I’ve been doing pelvic floor therapy with a physical therapist in Louisville. I have found this treatment to be very helpful. I do the recommended exercises every day and use a TENS unit when the pain flares up. I also decided to try acupuncture. I go every other week, because I find that the treatment eases both pain and anxiety. Additionally, I go to a massage therapist twice a month and see a Reiki specialist who recommends vitamins, enzymes, and probiotics to aid digestion. I discovered that the Tramadol had caused severe constipation, so I stopped taking it. With the help of herbal teas and Colace, a stool softener, my bowel function is now fine.

I am no longer on prescription medications for vulvodynia. I take herbal medication that my acupuncturist developed to relieve the burning after urination. I drink it three times a day and it has eliminated pain between urinations and during the night. I do continue to use Aquaphor after each urination to minimize immediate burning. I am very grateful that all these healers have come into my life.